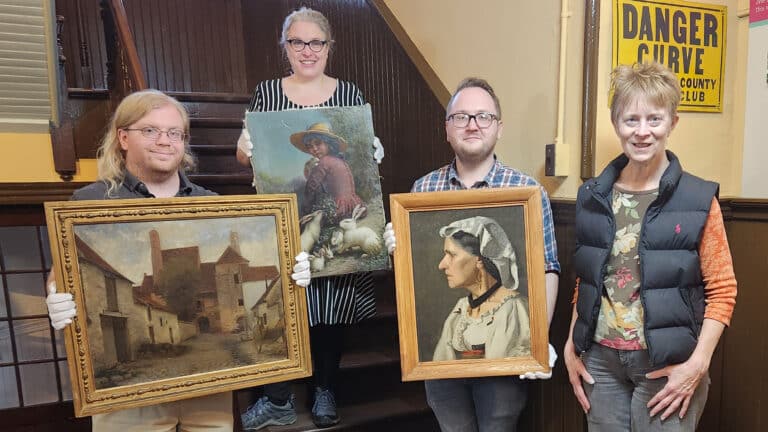 The Chenango County Historical Society (CCHS) is delighted to announce a collaboration with Christine Isabelle Oaklander, Ph.D. to celebrate the legacy of native Sherburne artist Henry Grant Plumb (1847-1930). This collaboration includes the donation of several dozen pieces of artwork, including drawings, oils, prints, and watercolors. Scenes from Chenango County, New York City, Boston, and Europe are included, spanning the scope of the artist’s entire career. Themes include landscapes, portraits, and genre paintings. Plumb’s precocious childhood drawings are a highlight of this acquisition.

These donations, divided into several annual installments, will transfer most of the cache of Plumb’s art purchased by Oaklander in 2014. The remarkable story of the original acquisitions was published in the Maine Antique Digest and the New York Times, as well as being the subject of several articles in the Sherburne News.

Years ago, Margaret Plumb donated tools of Isaac Plumb (her grandfather) and artwork of Henry Grant Plumb (her father) to CCHS. Margaret Plumb’s close friend Nicholas Pavlik inherited the artist’s estate from her. In recent years, Pavlik has begun donating and selling portions of this collection, including a recent gift of a large selection of Plumb artworks to the town of Sherburne. The portion of the Plumb collection purchased by Oaklander was consigned by Pavlik to Swann Auctions, in New York City. Oaklander bought her portion of the collection from the Swann Auctions purchaser at the Allentown Paper Show in 2014.

Plans are underway for an exhibition and accompanying publication to be facilitated by CCHS in the next five years, with Oaklander to serve as guest curator. “It is exciting to know that the art will be ‘coming home’ to Chenango County,” said Oaklander. “I am happy to know that Henry Grant Plumb, a talented artist and teacher, and humorous, adventurous individual will be properly recognized. Plumb – along with Sherburne native Tompkins Matteson – was a leading artist of his day. This collaboration will allow for Henry Grant Plumb to be given his rightful place in the chronicles of Chenango County history and American art overall.”

“We are supremely grateful to Christine for entrusting our museum with this priceless collection,” said Jessica Moquin, executive director of CCHS. “The collaboration with her to develop experiences which fully celebrate Henry Grant Plumb’s legacy is truly a once-in-a-lifetime opportunity.”

Established in 1939, CCHS is the primary organization dedicated to actively and comprehensively preserving the history of Chenango County. The area’s premier heritage museum, the organization celebrates local culture – unique traditions, noteworthy residents, and unusual stories of the region. CCHS programs are made possible by the New York State Council on the Arts with the support of the Office of the Governor and the New York State Legislature.