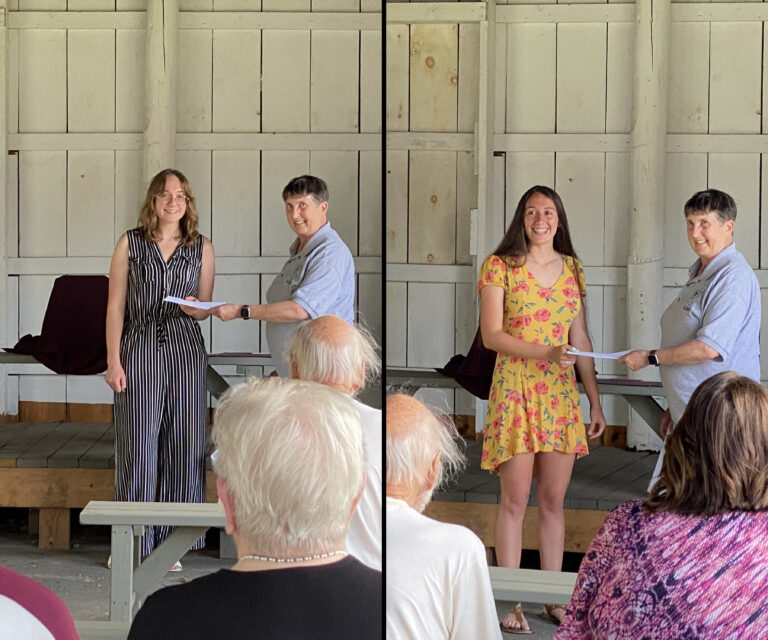 This year, the recipients are Amy Avolio of Norwich and Bailey Mizrahi of Sherburne. Avolio, a graduate from Unadilla Valley Central School, plans to study Film and Animation at Rochester Institute of Technology. Mizrahi, an alum of Sherburne-Earlville High School, intends to major in Early Childhood Education with a minor in coaching at SUNY Cortland.

During her time at Unadilla Valley, Avolio was actively involved in both band and chorus, being selected to perform several times in NYSSMA “All-County” festivals, as well the UVCS Drama Club and the National Honor Society. With a life-long appreciation for the arts, Avolio hopes to make an impact through animation. “Looking forward, I see myself as a storyteller. (I’m) someone who can help you forget about your own world for a little while, and pull you into one I’ve created,” says Avolio. “I want to make a difference in people’s lives, even if it’s just a small one, and I want to do it through beautiful animations and lovable characters.”

Throughout her years at Sherburne-Earlville, Mizrahi has been involved in a wide array of extracurricular activities including soccer, track and field, cheerleading, and Mock Trial. In addition, Mizrahi spends time mentoring and coaching, as well as serving on the Chenango Youth Philanthropy board. Mizrahi notes that working with children played a large part in her decision to study education. “I really love to mentor,” says Mizrahi. “Going over to see (and) work with the kids is the highlight of my day. Whenever I go to the elementary (school), I am greeted by lovely smiling faces. I feel that I am making a difference.”

Elinor Robb Troicke served for many years as a volunteer museum educator at CCHS. She taught art at Oxford Academy and Central School for more than 20 years before retiring in 1989. She was a very active member of the McDonough United Methodist Church, where she taught Sunday School and Vacation Bible School. She was also a member of the United Methodist Women and was involved in every facet of the church.

At the time of her passing, Don and Anita Sheldon said Elinor Robb Troicke “was a pillar in the McDonough community. For the past seven years, Troicke has been a column of support for area high school seniors.”

Troicke also served as Cub Scout and Girl Scout leaders, was a member of the Chenango Piece Makers Quilt Club, co-founded the McDonough Improvement Committee, brought the McDonough Library and Calvary Community Center to fruition, and served as the Town of McDonough historian.